and send message via your command line

When upgrading ubuntu, sometimes it failed because of insufficient disk on boot. This could be caused by too many kernel installed on the machine.

altogether, sed -n '/'`uname -r`'/q;p' is print the lines until it matches with the current kernel name.

use alt + . will reuse the last program argument in descending order

pbcopy alternative for copying to clipboard

we can have something similar in linux. Put this is your shell profile (~/.bashrc or ~/.zshrc if you are using zsh)

Jumpcut is clipboard manager that allows you to select your copy history.

Let say you copy fil the contents of A, B, C, D. After you copy file D you want to paste the file B. Usually you have to go back to copy the content of file, but now you don’t have too.

Using terminal and needs to copy the result of command to clipboard ? use pbcopy

Or the other way around, paste from clipboard and pipe it to other program

I’m so excited with the new release of golang. One particular feature is now very easy to build for multiple architecture. If you seen my other posts, I also like to tinker with my raspberry-pi. On my previous project I use either ruby or python for building some stuff. One annoying thing is dependency, setup and compilation is usually quite slow. Would be cool if I could just create some stuff in desktop and just scp the binary to pi and everything should work!

There is this nice article that explain the process. Let’s start there and create simple application

Let’s try to build it

Now, crossing my finger, and run it on my pi

Again, build and scp, and cross some more fingers

Super awesome indeed, it just works!. Oh and the binary is not that big 1.9M considering it statically include the library.

Hmm let’s try something fun that fiddle with the gpio pin. Let’s create something that what raspberry-pi made for.. blinking led :p

There is already library. Let’s starts there.

Of course we’ve got this far, we must try to control it remotely via HTTP.


Look at that. All it takes to do that is just 67 lines of code. The main logic just about 31 lines. That’s including the fancy dancing blinking. No framework, only gpio dependency. Everything else is go stdlib.

Ok, let’s do one other thing. The reverse! Trigger something when button is pressed. For this let’s just use websocket, and see how hard it is to implement this. What this mean that if you have websocket client (web browser) you could listen to event and stream it directly from your raspberry-pi to your computer.


You see there I connect 2 client. One browser and the other one is cli app that I created. Notice that they got their messages alternately between each other. This is because they are sharing the same channel. I will leave it to you my kind reader as an exercise to make it broadcast the message instead of distributing them :)

all source are available at https://github.com/yulrizka/go-pi-experiments

Push To Talk app for OSX 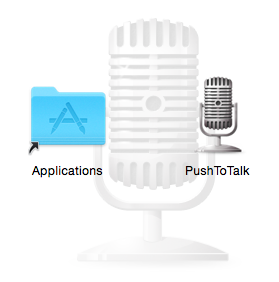 As a part of scrum teams, every day I need to give updates to my team via Google Hangout. We have a team here in the Netherlands and also in Indonesia. Some times I am in the same room as a colleague of mine. This sometimes quite annoying because I can hear my self (with a delay) from his mic. This somehow messed up my brain. Google Hangout already has a ‘auto adjust mic volume’ that is really great which cancel the noise. But we still have a problem and end-up muting each other when we want to talk.

There are currently an App that does this already on Apple store, and pretty cheap too. Nevertheless I could not find the one that is suitable for my needs. And I would like to develop an OSX app since I never done it before. Even though i have a hate-love relationship with XCode, I have to give credits to XCode. It’s quite easy to create an app like this.

I’ve only tested this app on my MacBook running Yosemite.

If you are on Linux, there is also a phython GTK app that does this really nicely.

If you are on windows, well Godspeed my friend :)

<( ) operator executes command inside the parenthesis and output the file descriptor